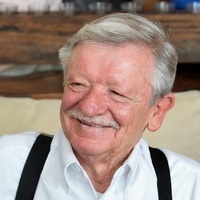 Robert L. “Bob” Fritzel died peacefully with his family at his side on March 14, 2019 in Pueblo.  Bob was born July 7, 1947 in Pueblo to William M. and Mary Fritzel.  He attended St. Mary’s Elementary School and graduated from Pueblo Catholic High before attending Southern Colorado State College (CSU-P).  Bob worked as a Histology Tech at St Mary Corwin Hospital before retiring after 48 years and was well known and respected in the Pueblo funeral industry having worked for several funeral homes during the past 50 years.   He was the drummer of the Casuals Dance Band, was a member of South Pueblo Lodge #31 AF&AM, B.P.O. Elks Lodge #90 and the Preseren Club.  Bob was preceded in death by his grandparents, Joseph and Mary Fritzel and Joseph and Anna Gorsick; his parents; his first wife, Jean; nephew, Michael Fritzel and his sister-in-law, Judy Fritzel.  His survivors include his devoted life partner Kathleen Kenick; loving sons, Kent (Nick Barnes) Fritzel, Scott (Claudine) Bononcini and Chris Kenick; his brother, William Fritzel; niece, Cindy Owsley; great niece and nephew, Jessica and Jimmy Owsley; several grandchildren and great grandchildren. Bob was devoted to his family and especially active throughout his community – his involvement advanced him through officer chairs up through becoming the District Deputy Grand Exalted Ruler for the Elks and Worshipful Master for the Masons He cherished and celebrated his Slovenian heritage. He will be remembered for his kind and gentle spirit by all whom had the pleasure of knowing him.     Recitation of the Rosary will begin at 6:30 PM on Monday, Mar 18th in the St. Mary Catholic Church. Mass of the Christian Burial will be held at 10 am on Tuesday, Mar 19th in the St. Mary Catholic Church, 307 E Mesa Ave.  Interment will follow in the Roselawn Cemetery with Fraternal Burial Rites provided by BPO Elks Lodge #90 and South Pueblo Lodge #31 AF&AM.   It was his wish that in lieu of food and flowers contributions in memory of Mr. Fritzel are directed to the Shriner’s Children’s Hospital Transportation Fund or to the BPO Elks Lodge #90 through the mortuary.  Online condolences at DavisMortuary.com
To order memorial trees or send flowers to the family in memory of Robert "Bob" Fritzel, please visit our flower store.