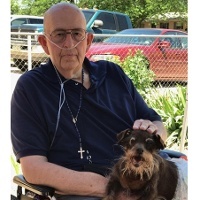 Richard T. Siefford  passed away on Aug. 14, 2019 in Pueblo.  Richard, affectionately known as “Big Rick”, was born Mar 15, 1953 in Pueblo to John and Peggy Siefford.  He was employed at the Pueblo County Sheriff’s office for over 30 years before his retirement.  Richard enjoyed the outdoors; especially hunting, fishing and farming.

He was preceded in death by his parents.  His survivors include his children, Leanna Siefford, and Walter Siefford; siblings, John Siefford, Kay McDowell and Karen Ziegler as well as numerous nieces, nephews and other relatives.

Visitation for Richard was held on Saturday from 8 am until service time at the mortuary.  Funeral services were held at 10 am on Saturday in the Davis Memorial Chapel.

In lieu of flowers the family suggests donations be made to the PAWS for Life Animal Shelter.   Online condolences at DavisMortuary.com

To order memorial trees or send flowers to the family in memory of Richard Siefford, please visit our flower store.