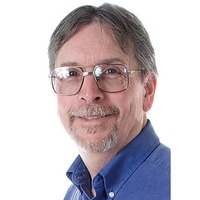 Emeritus Professor Richard A. Joyce passed away February 2nd surrounded by his wife, children, daughters-in-law, and newborn grandson.   Born in Scranton, Pennsylvania in 1947, to Dorothy (Held) and Richard Henry Joyce,  Richard served in Vietnam as a member of the US Air Force teaching English as a second language.    Richard was a journalist and champion of the First Amendment. He was the Managing Editor of the Canon City Daily Record and a dedicated mass communications teacher for over two decades at CSU Pueblo. Teaching was his passion. He was a beloved and respected professor and colleague which is evident in the outpouring of love and sadness being expressed by all who knew him.   Richard was well known for his quirky wit, razor-sharp analytical mind, and his remarkable nature photography. His gift of gab, typical of an Irishman, served him well whether conversing with a college student or his two month old grandchild.    Richard was a huge movie buff. He switched easily from black and white oldies, to major motion pictures, to crying through Coco and Moana with his grandson, Jackson. He loved music, dabbled in Irish flute and guitar and loved to share stories about attending Woodstock.   Richard’s Irish ancestry was his great pride. He is a direct descendant of the jeweler who designed the Claddagh wedding band in 1750 Ireland. In his later life he visited Ireland three times and his wonderment at its beauty and people was striking. At times he was speechless, a rare occurrence for the man!   Richard is survived by his wife Tammy, daughter Shannon (Greg), sons Ryan (DeeDee) and Josiah (Elizabeth), and grandchildren Olivia, Jackson and Nathaniel.    A celebration of Richard’s life will be held at 2 pm, Sunday, February 23, 2020 at the Pueblo Union Depot in Pueblo, Colorado. Please wear blue, Richard’s favorite color, and enjoy a few hours of memories, jokes, peace, love and, of course, a pint of Guinness.    As a donor, Richard will be providing the gift of life to many recipients.   The family requests no food or flowers but those wishing to may donate to the Richard A. Joyce Memorial Scholarship, CSU Pueblo Foundation, 2200 Bonforte Blvd., Pueblo, CO 81001.
To order memorial trees or send flowers to the family in memory of Richard Arthur Joyce, please visit our flower store.