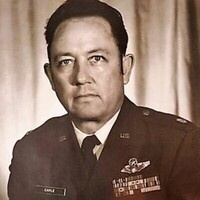 Funeral services will be held at 2pm Saturday July 10, 2021 at Dannel Funeral Home, Sherman, TX with Senior Pastor John Matey of Joshua Crossing, officiating. A funeral service will also be held at Davis Mortuary in Pueblo, CO on Saturday July 17 at 10 am with burial to follow at Beulah Cemetery, Beulah, Colorado. Arrangements are by Dannel Funeral Home Sherman, TX and by Davis Mortuary in Pueblo, CO.

John Wayne Caple Sr. was born in Guymon, OK to John Jacob Caple and Dora Viola Hankla Caple on February 22, 1925. He went to school at Pueblo Central High School, Pueblo, CO. He married S. Ruth Dwight Caple on December 15, 1945 in Beulah, CO. He graduated from the University of Denver and George Washington University. After retirement, he attended Grayson College and received certifications and Associate degrees. He served in the Navy in the South Pacific in WWII and was a fighter pilot in the Air Force during the Korean and Vietnam wars.

Memorials may be given to Veterans of Foreign Wars Post 2772 Sherman, TX.

To order memorial trees or send flowers to the family in memory of Lt. Col/Ret. John Caple, Sr., please visit our flower store.