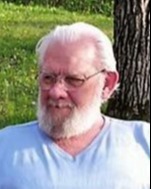 A child often shows love to an aging parent in a circular way, it is said, by becoming a parent’s caretaker. It was so for Lonnie E. Ames.

A Pueblo transplant from Minnesota since 1975, Lonnie welcomed his late mother, Bertha Ames, into his home for several years as she went through Alzheimer’s disease. She died there in 2016 at age 97.

He married Bertha “Bertie” Janvrin on May 2, 1964, in Rochester, MN. She died in 1980. He is survived by two sons, Erik (Seana) Ames of Goodland, KS, and Eugene (Gina) Ames of Pueblo West; and 10 grandchildren and many great-grandchildren. Lonnie later married Sarah M. Atteberry, who died in 1999.  He was also proceeded in death by his father in 1987.

Lonnie first moved his family to Pueblo West in 1975 to pursue his welding career. He was a well-respected specialist in his field, working for Johnny’s Boiler Shop near downtown Pueblo for 30 years.

Lonnie had a passion for building and riding Harley-Davidson motorcycles. He liked to ride with friends and was a member of the national Harley Owners Group.

To order memorial trees or send flowers to the family in memory of Lonnie E. Ames, please visit our flower store.