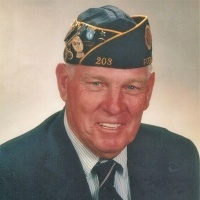 Joseph B. Curtsinger died August 3, 2019 in Pueblo, Colorado. Joe was born on January 30, 1932 in Pueblo to Lula and Wilbur Curtsinger.  He was a veteran of the US Army having earned the Bronze and Silver Stars for his service in the Korean War, was a life member of VFW Post #3641 and of the Pueblo American Legion Post #203. He, along with his father, owned and Curtsinger Tree Service for many years.  Joe was a kind and generous man.

Mr. Curstinger was preceded in death by his sisters; Evelyn, Jeanie and Betty.  His survivors include his wife of 20 years, Patricia and several other relatives.

Visitation for Mr Curtsinger will be held from 3 PM until 6 PM on Thursday, Aug 8th at the Davis Mortuary. Cremation will follow.

A memorial service will be held at 2 PM on Friday, August 16th at Ascension Episcopal Church, 420 W. 18th Street in Pueblo followed by inurnment in the Ascension Church Columbarium.  Military honors will be provided by the Pueblo Veterans Ritual Team.  Online condolences at DavisMortuary.com.

To order memorial trees or send flowers to the family in memory of Joseph B. Curtsinger, please visit our flower store.