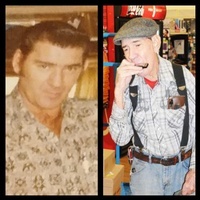 Harry Leroy Oles was born July 31, 1936 in Pueblo Colorado and died peacefully on May 30, 2018 in Pueblo Colorado from Lymphoma cancer.    His parents, Thomas Leroy Oles and Rosie Mae Harmon, were married in 1933 and they had seven children; Harry, Mary, Rosie, Clara, Thomas, Ella and Richard (yes, they intentionally named their three sons “Tom, Dick and Harry” although not in that order).   Harry married Leona Thomason (who had three children at the time) on December 23, 1954 and they had two sons, Jody and Randy.  They later divorced in 1965, remarried in 1969 and again divorced in 1979.  He attended Pueblo Centennial High School but left after finishing the 9th grade to go to work.  Although he had many occupations including sanitation engineer, stockyard worker, gas station attendant as well as many others, he was best known for his abilities as an engine mechanic.  He could fix pretty much anything that had an engine from, lawnmowers and motorcycles to cars and trucks.  He was considered the best carburetor man around.  He lived most of his life in Pueblo but he did spend a year in Southern California seeking employment but then came back to Pueblo.  He was an avid motorcyclist and bicyclist.  He raced motorcycles and did competitive hill climbing.  He even won a state championship hill climb.  As his interest in competitive motorcycle racing began to diminish, he turned to bicycling.  He raced in many 100 mile races always trying to beat the younger riders.  In his later years he was best known for his music which included singing, playing the piano and keyboard but especially playing the harmonica. He was never without his harmonica and no matter what restaurant (the McDonalds on Pueblo Boulevard was a daily visit) or other public place, he would suddenly break out his harmonica and start playing to the applause of the customers and employees.  He was known as “Harmonica Harry” and had a one man band where he played at many Nursing homes throughout Pueblo as well as both Eagles Aireys.   He was also famous for his jokes.  He could tell a joke in a way that would bring a smile to people of all ages from the smallest child to the older senior citizens. He was preceded in death by his Father Thomas Leroy Oles, his Mother Rosie Mae Oles, his brother Richard Oles, his brother Thomas Oles his sister Mary Terwilliger (Oles) and his stepson Bruce Johnson. He is survived by his two sons Jody (Diane) Oles and Randy (Carol) Oles, two Stepsons Leroy Johnson and Glenn Johnson, three sisters, Rosie (Dennis) Kotke, Clara Barns and Ella (Charles) Alarcon, 12 grandchildren and 13 great grandchildren. A memorial will be held for Harry on Monday, June 4 at 10:00am at the Davis Mortuary, 128 Broadway, Pueblo, Colorado.
To order memorial trees or send flowers to the family in memory of Harry L. Oles, please visit our flower store.