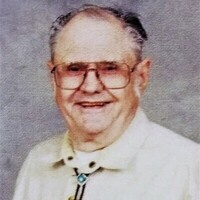 Harold “Hal” Boyd McConnell, Ph. D. passed away March 12, 2021 in Pueblo.   Hal was born April 18, 1933 in Trinidad, Colorado, the only child to,  Helen and Harold McConnell, Sr.  Hal or Mac as he was also known, grew up in Trinidad and moved to Pueblo where he attended and graduated from Central High School.  He attended PCC and DU. He received his Masters Degree from Webster and went on to get his Doctorate in Science Education.  He was a longtime science teacher in  District 60 before retiring in 1988 after 32 years.   Mac loved teaching and traveled all over teaching graduate science classes to other teachers but his favorite educating experience was teaching science to 6th and 8th graders at Roncalli Middle School.  He belonged to Sigma Phi Epsilon, was a member of the Colorado Educators Association, the National Educators Association, the Colorado Teachers Science Teachers Association and the National Science Teachers Association.   Harold McConnell served on the Board of Directors of the Colorado Science Olympiad. He brought tremendous energy to the organization and was dedicated to helping promote K-12 science throughout the State of Colorado, and especially for students in Pueblo. He helped bring the Southern Regional Colorado Science Olympiad Tournament to the University of Southern Colorado (now known as CSU-Pueblo) and the National Tournament to the campus, as well. Harold was literally a one-person “Chamber of Commerce” for The City of Pueblo...an incredible advocate.  He loved SCUBA diving and became a SCUBA Diving instructor.  He was a member of the Gypsy Scuba Divers and loved sharing his experiences and travels from his dives all over the world.   Hal was a member of King of Kings Lutheran Church in Pueblo.  He loved his church and knew the Bible.  He was an avid reader and was very involved in politics.  During his retirement years, Mac lived in and enjoyed his cabin in Wetmore, Colorado.  Every year around Labor Day he hosted shrimp boil at the cabin.  Mac was a one of a kind individual.  He was a person of devotion and dedication.  In fact, he would give you the SCUBA tank off his back, if you needed air!

Former Presidents and Board Members of the Colorado Science Olympiad and others associated with the Science Olympiad, specifically wished to publicly express their gratitude, for his outstanding service to the many science students in Colorado, who he supported in so many ways...a legacy that will continue beyond his passing.

Hal was entombed in the Last Supper Mausoleum following a graveside service to be held at 1 :00 PM on Thursday, March 18, 2021 in the Imperial Memorial Gardens, with Pastor Bill Doyle, of King of Kings Lutheran Church, officiating.

To order memorial trees or send flowers to the family in memory of Harold (Hal) McConnell, Ph.D., please visit our flower store.