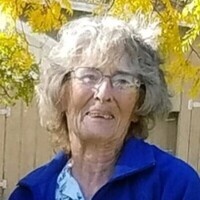 Eleanor had attended Whitworth College in Spokane.  She met her husband who was stationed at Fairchild AFB, and on Sept 23, 1956 Eleanor married Darrell Louis “Art” Frey, who preceded her in death in 2017.   His job was with the US Forest Service took them to Twisp, WA for many years, and then on to Chemult, OR, where she owned and operated a restaurant for several years.  She used to enjoy going on backpacking trips during the summer, and crosscountry skiing during the long winters in Chemult.  They eventually moved to Klamath Falls, OR where she was finally able to grow a garden and put in a Koi pond.  Upon retiring, they returned to Eleanor’s family home in Omak, WA, where they helped with the orchard and taking care of her aging parents.  After Art’s death, she oved to Rye, Colorado to live with her daughter Karen and her husband John, where she spent many hours knitting.  She loved to knit socks, and always had a pair in progress, usually in bright and cheerful colors which she would give as gifts to friends and family.

At her request, cremation.  There will be no public services.  Online condolences at DavisMortuary.com

To order memorial trees or send flowers to the family in memory of Eleanor Lucile Frey, please visit our flower store.