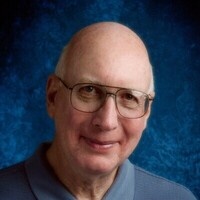 E. Ed Pitts passed away on January 2, 2021 in Pueblo, Colorado. He was born November 16, 1941 in Webster Groves, Missouri where he was raised by his loving mother Rhoda Pitts along with his 3 siblings Shirley, Virginia and Tom. He headed off to school at Oklahoma Baptist University where he met his future wife Linda.  He graduated in 1963 with a BS in Physical Education. After coaching 1 year in Nebraska, he then followed Linda to Pueblo, CO to teach for Pueblo District 60.  Ed received his MS in Education from CSU Ft. Collins in 1967.   During his 35 years with the District, he taught at Thatcher and Somerlid Elementary Schools.  He retired in 1997 and then filled his time teaching Geography at The Connect School and preparing taxes for H&R Block.  He enjoyed reading, working outside in the yard, traveling with his children and grandchildren and cheering on the Colorado Rockies and St. Louis Cardinals.   Alongside Linda, Ed devoted his time and skills to Aberdeen Baptist Church, Royal Gorge Baptist Association, Gideons International, and Fellowship of Christian Athletes among other service organizations.

Ed was preceded in death by his parents, 3 siblings and an infant daughter.  Left to celebrate his life and cherish his memory is his wife of 56 years Linda Pitts; daughter Lisa Petrick and her husband Brian and grandsons Blake and Brody; son Darin Pitts and his wife Paisley and their sons Eli and Sam; nieces/nephews and numerous friends.

The family invites all who would like to celebrate Ed’s life to join the memorial service which will be live streamed on January 8th at 11am.  Please go to aberdeenpueblo.org/memorials to join the virtual service.  Private family interment was in the Imperial Memorial Gardens in Pueblo.  Online condolences are available at DavisMortuary.com

To order memorial trees or send flowers to the family in memory of E. Ed Pitts, please visit our flower store.