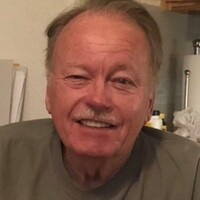 Don was born August 1, 1945 in Cedar Rapids, Iowa and was raised on the family farm in North Liberty, Iowa.  After graduation, he joined the Navy, serving on the USS Shangri-La Aircraft Carrier. After his service he moved to Pueblo, enrolling in the auto mechanic program at PCC. Don married Shirley and was very involved in Natalie’s upbringing. Don could fix or "Deverize" anything!

He became a Journeyman Glazier at Pittsburgh Plate Glass Co, then went on to work for Harding Glass and Cimarron Glass. He joined the Pueblo Fire Department in 1978 and retired after 20 years of service in 1998. He opened his businesses, the Glass Peddler and Skylighter Aerial Fireworks. Don belonged to King of Kings Lutheran Church.  Car racing, his Harley Davidson, fireworks, spending time with his grandkids and his many beloved dogs were the absolute joys of his life.

A celebration of life will be held at a future date that is TBD.  In lieu of flowers, donations may be made to Paws for Life Animal Shelter.

Online condolences may be made at davismortuary.com.

To order memorial trees or send flowers to the family in memory of Don F. Dever, please visit our flower store.