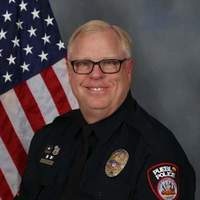 David Allen Jacober, passed away Jan 7, 2020 in Pueblo. He was born in St. Louis, MO. David was a veteran of the US Army and loved serving his community as a Pueblo Police Officer where he was instrumental in starting the Drone Program. He served as the School Resource Officer for Central High School for 11 years and considered himself a proud wildcat. David loved hockey and was an avid fan of the St. Louis Blues. He had an ability to connect with people and loved his family but adored his wife Melissa of 25 years. He was preceded in death by his grandparents Alfred and Alberta Jacober and Clyde and Eula Hyams. David is survived by his wife Melissa; children, Christian (Silvia), Amanda (Paul), Heidi (Vera) and Cameron Jacober; grandchildren Olivia and Thiago; his parents, Ronald and Lois Jacober; his brother Jeff (Marilyn) Jacober; his in-laws, Peter and Glennell Spangler; brother-in-law Brian (Julie) Spangler: sister-in-law Ann (Scott) Spangler; nieces and nephews Sarah, Michael, Eleanor, Benjamin, Grant, Hollis and Coeta. Special Thanks to all his friends and family especially his brothers and sisters in Blue and entire first responder family along with the staff of Rocky Mountain Cancer Center, Dorcy Cancer Center, Parkview Hospital, St. Mary Corwin Hospital, King Soopers Northside Pharmacy and Sangre de Cristo Hospice whose support meant the world to him during his cancer battle. Visitation will be held on Wednesday, Jan 15th from Noon until 8 pm at the Davis Mortuary. The family will be present from 4-8 pm. Funeral service will be held on Thursday, January 16, 2020 at 2:00 PM at Praise Assembly of God Church, 2000 Troy Avenue in Pueblo. Interment will follow in the Imperial Memorial Gardens with Honors provided by the Pueblo Police Department Honor Guard and the Fort Carson Honor Guard. Immediately following the graveside service, a reception will immediately follow the at Central High School, In lieu of flowers please make a donation to Dawg Nation Hockey Foundation or your favorite charity.  Online condolences at DavisMortuary.com
To order memorial trees or send flowers to the family in memory of David Allen Jacober, please visit our flower store.