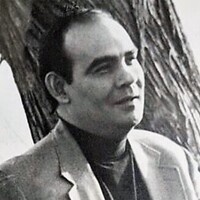 Ben Ramos was born on October 2, 1957 and died on October 26, 2020 in Pueblo, Colorado.
Ben was preceded in death by his parents, John and Bea Ramos, his brother Chris and his sister Bernadine. He is survived by his wife Jill, his daughters Toni (Bobby) Crittenden and Michelle Ramos; his grandchildren Chris Ramos, Tyeshia Ramos, Bobby Crittenden and Trista Crittenden; and two great-grandsons, Zavery and Zayden Ramos. Ben was loved by his siblings: Angel and Shirley, Martha and Don, Manuel and Susie, John, Apple, Jackie and Randy, Jeff, and Jason; along with many aunts, uncles, nieces and nephews, cousins, and those he chose to include in his family.
He was very active in our Pueblo community, with an emphasis on youth and families in need. He enjoyed sharing his musical gifts with his faith community and the Pueblo Barbershop Chorus.
A virtual Memorial Service will be available for viewing on King of Kings Lutheran Church’s Facebook page starting Tuesday, November 3, 2020.
In lieu of flowers, memorial gifts can be given in his honor to King of Kings Lutheran Church’s Youth Group - 2561 Vinewood Ln., Pueblo, CO 81005 or to the Ben Ramos Memorial Fund - The Pueblo Rescue Mission, 728 W. 4th St., Pueblo, CO 81003.
Online condolences at DavisMortuary.com
To order memorial trees or send flowers to the family in memory of Ben Ramos, please visit our flower store.