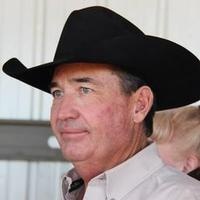 Bryce Knowlton Oct. 4, 1955 to Jan. 10, 2017 Bryce Franklin Knowlton of southeastern Colorado lost his battle to ALS and departed his earthly home on January 10, 2017. He was 61 years old. A third generation livestock producer from the Colorado Highway #10 area, Bryce lived his entire life as a cowboy, rancher and cattleman. From his earliest years growing up in the White Rock Community, he was a 4-H member in Huerfano County and an FFA member at Fowler High School. He chose early to live a life dedicated to taking care of livestock and the land.  He participated in rodeo as a young person. He totally appreciated the value of a good horse under his saddle, and he rode many miles through the cedars and the canyons in the prairie breeze. Bryce attended Walsenburg schools until the fifth grade. He graduated from Fowler High School in 1974. As an accomplished musician, prior to his 30s he led a Country Western dance band that played at nearly every venue throughout southeastern Colorado and points beyond. He was always eager to share his love of music and his talents, primarily on the guitar. He taught many how to play music, including all of his children. When they were little, he aspired to help them have musical careers.  Bryce liked to dance. He was good at building things. He was even better at coming up with nicknames for every critter (animal and human) that he came in contact with over the years. If he gave you a nickname, he loved you more than you ever knew.  He loved fighting chickens and always had a few prize roosters at his ranch, perhaps they represented his own desire for an occasional scrappy encounter.  In addition to his ranching life, he did some sideline work for others over the years in areas where he lived, including the home place on Highway #10, Boone and Fowler. He did masonry work, specializing in moss rock design, and at the time he became ill, was a brand inspector for the State of Colorado working out of the LaJunta office.  He professed to live ‘the cowboy way’, and he walked the talk.  He was also a very avid hunter and fisherman, and he loved a cold beer. His contagious grin, unmistakable laugh and ornery zest for life always preceded him. He shared the gospel often, once asking a man he saw praying at a fast food restaurant if he was asking God to make that hamburger into a steak. He befriended that same man and had him as a guest at his home. If Bryce didn’t know you, it was simply because he hadn’t met you yet.  Much of his life was spent getting his children to music, rodeo and sporting events, and he made many friends everywhere he went. Bryce married Ronda Wright in 1978, a marriage that ended over three decades later.  To this union came six surviving children including Addie (Aaron) Haynes, Los Lunas, NM; Tressie (Clint) Gershenson, Castle Rock, CO; Cassie (Aaron) Yanker, Rye, CO; Rowe (Larissa) Knowlton, Crook, CO; Liddie Knowlton and Dovvie Knowlton, Fowler, CO.  His grandchildren include Holt, Haxton, Hazel and Hardy Haynes, Leo Gershenson, and Coyd and Corbyn Yanker.  Other survivors include his mother, Melba Knowlton, Fowler, brothers Tom Knowlton of Fowler and Blake Knowlton of Aguilar; sisters Janelle (Tom) Baldwin, Fort Collins, Nancy Hazlett, Pueblo, Marianne Bush, Pueblo and Barbara Baker, Portales, NM, and Paco, his beloved red heeler.  Bryce was preceded in death by his father Allen Knowlton, a brother David Knowlton, grandparents Herbert and Tressie Knowlton, Rowe and Edna Rafferty and nephew Ethan Bush. Davis Mortuary is in charge of the service. Cremation has taken place. Bryce is now at home in the arms of Jesus. A celebration of his life will be held on Sunday, January 15th at 2 p.m. at Pueblo Community College, Fortino Ballroom, 900 W. Orman Avenue. In lieu of flowers, donations may be made in Bryce’s name and sent to 128 Broadway Ave, Pueblo, CO 81004, or condolences shared online at davismortuary.com
To order memorial trees or send flowers to the family in memory of Bryce Knowlton, please visit our flower store.