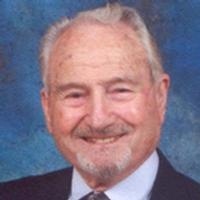 Carmen Bucciarelli passed away June 11, 2016 in Pueblo. Carmen was born Sept 26, 1925 in Pueblo to Carmine and Carmella Bucciarelli and was a lifelong resident. He was a veteran of the US Navy having served during WWII and was a member of King of Kings Lutheran Church. Carmen owned and operated the Pueblo Bottling Company for many years before retiring in 1988. He was preceded in death by his parents, his sisters, Marie Neelan and Josphine Bucciarelli and his former wife Josephine Bucciarelli. His survivors include his wife Betty Bucciarelli: sons, Charles (Cheri) Bucciarelli and Carmen J. (Irene) Bucciarelli, III; his daughters by marriage, Kristina (G. Terry) Wickizer, Suzanne (John) Dutchyshyn and Kathleen (Ed) Perme; 7 grandchildren, Shawn (Nicole) Bucciarelli, Shawn (Laura) Wickizer, Rhiannon (Philip Astein) Wickizer, Andrew (Sarah) Jordan, Celine (Craig) Martin, Celeste (Jason) Perme-Tajar and Cyrus (Alicia) Perme; 7 great grandchildren; several nieces, nephews and several other relatives. Visitation will be held from 3 pm until 6 pm on Wednesday at the Davis Mortuary. Funeral service will be held at 11 am on Thursday, June 16, 2016 at King of Kings Lutheran Church , 2561 Vinewood Lane. Private entombment will be in the Roselawn Cemetery. In lieu of flowers donations in Carmen’s name are suggested to the King of Kings Capital Campaign Fund or to the Sangre de Cristo Hospice. Donations can be made directly or through the mortuary. Online condolences at DavisMortuary.com.
To order memorial trees or send flowers to the family in memory of Carmen Bucciarelli, please visit our flower store.