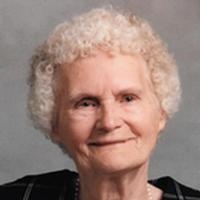 Agnes D. Knapp passed away April 28, 2016 in Pueblo, Colorado. She was born March 29, 1915 in Stringtown, Oklahoma to Samuel and Martha Gibson. Agnes enjoyed quilt making but her true passion was spending time with her family. She was preceded in death by her parents, her husband, Charles; daughter, Lanora (Robert) Winters; grandson, Michael, sisters Bertha and Tennie and brothers John, Jess, Jim, Dee and Arle. Agnes is survived by her daughter, Linda Krummel; 5 grandchildren, 7 great grandchildren, 6 great great grandchildren and her brother Robert Gibson. Mrs. Knapp will lie in state on Tuesday from 9 am until 1 pm. Graveside funeral services will be held at 2 pm on Tuesday, May 3, 2016 in the Roselawn Cemetery with Reverend Dr. Rick Calhoun officiating. Online condolences at Davis Mortuary.com
To order memorial trees or send flowers to the family in memory of Agnes D. Knapp, please visit our flower store.