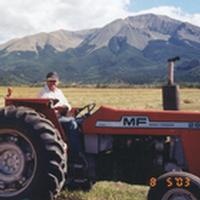 Bill Duzenack left this life on March 22, 2016 at his home near La Veta with his family by his side to be with his beloved wife and their dog BJ. He was 88. Bill was born in Walsen Camp, Colorado, House #89. He moved to La Veta with his family to begin the 3rd grade and went on to graduate from La Veta High School. Most of his life was spent ranching and farming in the La Veta area using his favorite Massey-Ferguson farm tractor. He was known for his stunning blue eyes and his love for dancing to polka music. Bill was always willing to help others and was known throughout the 18 Wheeler corridor as “3 Dollar Bill”. In 1950, he married Jean Brown and they remained married for 60 years before she preceded him in death. Bill was also preceded in death by 4 sisters and a brother. He is survived by his children; Dale (Susan) Duzenack of Canon City, Irene (Maurice) Heikes, Bill Duzenack, Jr., Diane (Paul) Morgan all of La Veta, as well as 8 grandchildren, 12 great grandchildren and numerous nieces and nephews. Graveside service will be held on Monday, March 28, 2016 at 11:00 AM in the La Veta Cemetery. A reception will follow in the United Methodist Church in La Veta. Online condolences at DavisMortuary.com
To order memorial trees or send flowers to the family in memory of Bill Duzenack, please visit our flower store.