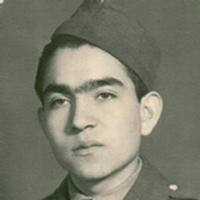 Jake Luis Tafoya passed away March 4, 2016 in Pueblo, Colorado. Jake was born June 28, 1924 in Farley, New Mexico to Jose and Mary Tafoya. He was a veteran of the US Army Air Corps having served during WWII. He worked as a crane operator at the CF&I Steel Mill for 30 years before his retirement. Following his military service, Jake moved to Pueblo and married Della Mascarenas who had four children. Jake and Della then had two more daughters. Mr. Tayola was preceded in death by his first wife Della in 1979, his second wife Agnes in 2012; 3 brothers, 2 sisters and his step-sons Orlando and Gilbert Mascarenas. Jake is survived by his daughters Louise Mitchell and Isabel Medina; step children, Gina Estrada and Ben Mascarenas; 6 grandchildren, numerous grandchildren as well as numerous nieces, nephews and other relatives. Visitation for Mr. Tafoya will be held from 9 am until Noon on Wednesday, March 9, 2016 at the Davis Mortuary. Graveside services will be held at 2 PM on Wednesday, March 9, 2016 at the Imperial Memorial Gardens with Military Honors provided by the Pueblo Veterans Ritual Team.
To order memorial trees or send flowers to the family in memory of Jake L. Tafoya, please visit our flower store.