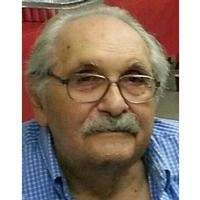 Joseph P. Frankmore, passed away January 25, 2016 in Pueblo. Joe was born May 9, 1934 in Pueblo to Pete and Frances Frankmore. He enjoyed cooking and baking which led to the opening of Joe Tomato Market and Deli. Joe loved to make cardone for family and friends during the holidays. He was a veteran of the US Marine Corps and a lifelong member of the Sons of Italy. He was preceded in death by his parents; his wife, Virginia and his brother Jerry. His survivors include his sons, Greg (Janace) and Mark (Cathy) Frankmore; grandchildren, Ciera, Conner, Brian, Madison, Dominic and Joseph; as well as numerous nieces, nephews and other relatives. Visitation was held on Sunday from 2 pm until 5 pm at the Davis Mortuary. Funeral Mass was celebrated at 10 am on Monday, February 1, 2016 in the St. Mary’s Catholic Church with entombment following at the Roselawn Cemetery. In lieu of food and flowers donations in Joe’s name may be made to the charity of your choice. Online condolences at DavisMortuary.com
To order memorial trees or send flowers to the family in memory of Joseph P. Frankmore, please visit our flower store.