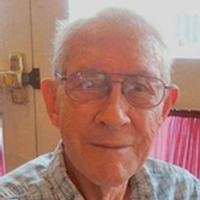 George Wilburn Gregg passed away December 15, 2015 in Pueblo, Colorado. George was born September 15, 1922 in Manzanola, Colorado to Ralph and Clara Gregg and had lived in Pueblo since 1946. George served in the U.S. Army Air Corps as a member of a B-24 crew. He was employed by the Denver and Rio Grande Railroad, CF&I Steel Mill and retired from the Pueblo Army Depot. He was actively involved in the Silver State Lodge #95 AF&AM. He was a longtime active member of St. Paul United Methodist Church and later at First United Methodist Church. George enjoyed volunteering for the Cooperative Care Center and visiting with people in local assisted living and nursing home facilities. He was a devoted husband, father, grandfather and great grandfather who will be sadly missed by his children: Cheryl Harper, of Pueblo, Connie (Tom) Comi, of Arizona, Cathie (Tom) Kolbe, of Denver, Candace (Steve) Ward, of New Mexico; two sisters, Elizabeth Mosier and Martha Mashburn, of Pueblo; 9 grandchildren and 10 great grandchildren. Funeral services will be held on Saturday, December 19, 2015 at 10 am in the First United Methodist Church, 310 W. 11th Street in Pueblo. Entombment will follow in the Last Supper Mausoleum at the Imperial Memorial Gardens in Pueblo. In lieu of flowers, contributions in memory of George may be made to the Sangre de Cristo Hospice, 1207 Pueblo Blvd Way, Pueblo, CO 81005. Online condolences can be found at DavisMortuary.com
To order memorial trees or send flowers to the family in memory of George W. Gregg, please visit our flower store.